With a high biblical symbolism, the Judgement Tarot Card is one card to keep an eye out for. For Tarot Card readers, it has in store, so much more than you can imagine. With a good knowledge of this card and its messages, we can extract more from this card, use it as a lesson to become wise and strong while trying to shape our reality.

If you want to explore the Judgement Tarot Card meaning, its symbolism, and its psychic revelation then keep reading.

The angel with large golden wings, who plays the trumpet wrapped in a blue cloud is most likely the archangel Michael, messenger, judge, and guide of souls. John writes in the Apocalypse, “I have seen the great and small dead before the throne”.

In fact, the family represents the triad that rises from the grave, symbolizes regenerated humanity. It is the judgment, the moment of truth in which what is material is separated from what is spiritual.

Everything in the paper suggests the victory of the spirit over matter, announced with the trumpet blare.

Through the synthesis of opposites, the male and the female, the fixed and the changeable, symbolized respectively by the man and the woman, emerging from the grave, the transmuted spiritual being is born, the alchemical child in their midst, to which both look absorbed in prayer. 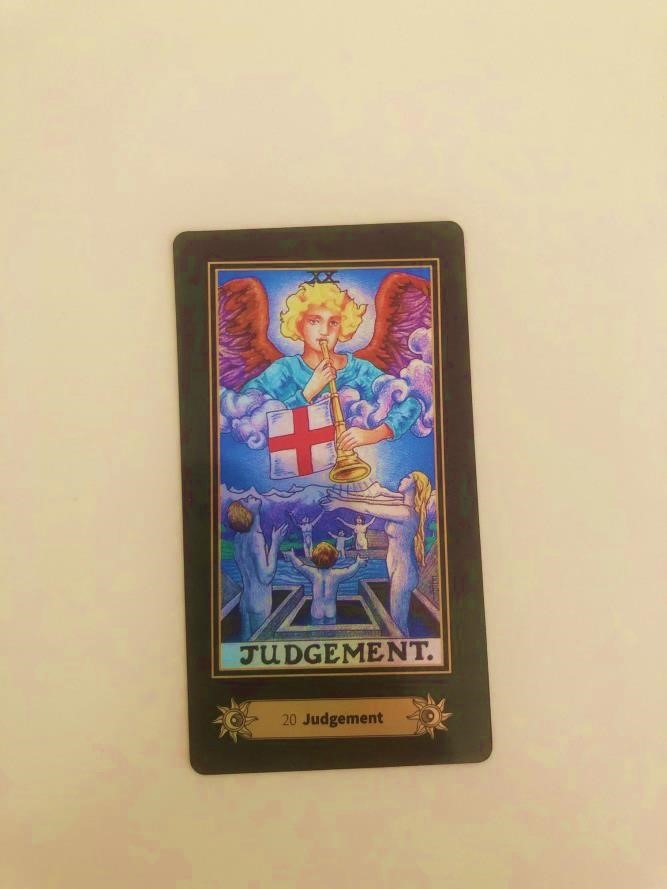 Also read:
What Does a Tarot Card Reading Tell You?

If the Judgement Tarot Card appears upright, it is the representation of the sudden unexpected which, like divine judgment, announces itself quickly and suddenly. Naturally, there will be pleasant surprises and positive events favorable to the question, especially when the card appears straight or accompanied by benevolent arcana.

A success, a victory, a conquest, or a complete renewal after a crisis, in short, a decisive turning point in life looms on the horizon in relation to love, work, money. Court cases and personal conflicts will be brilliantly resolved, the equivocal situations and the doubts clarified, any obstacles and problems are overcome, thanks to sudden and brilliant ideas, as well as to the protection of destiny.

In analogy with the trumpet blast and with the symbolism of the messenger angel, the Judgment often implies unexpected news, almost certainly reached through the most modern means of communication, symbolically placed under the jurisdiction of the planet Uranus, to which the card reconnects.

A letter, a phone call, fax, radio communication. The judgment of the cards is always favorable to the question. It indicates a change with evolution, even in relation to emotional activity, the change is never quantitative but qualitative.

Unexpected news and events, which manifest themselves regardless of the subject’s conscious will. Projects believed to be dead and buried, come back to light. A positive change from an addictive situation, change to an independent one.

On the emotional level, the Judgement Card means a new love, love at first sight, a decisive change in the relationship or its transformation, an unexpected change of partner. Sudden departure or return of a loved one, re-encounters, fraternal friendships.

Definitive change of position, promotion, carried out in studies and work. Positive news for your career. Maybe a new beginning is just around the corner, you just need to take a risk and see what happens.

Everything that is new or unusual, such as astrology, parapsychology, radiology, meteorology, laser surgery, nuclear or space experiments, planes, motor vehicles, or explosives. Frequent air travel for business reasons.

It is usually combined with a severe and impatient, abrupt but stimulating, magnetic, eccentric, free from a prejudiced individual. An aviator, an astronaut, an engineer, a technician, an astrologer, a radio/ television journalist, a fashion creator, or a freelance professional.

The rapid and unexpected transformation announced by the straight card translates when turned upside down, into a difficulty of renewal and the rejection of a glaring truth. Things deemed finished, must be called into question and revised. You must meet your commitments and take responsibility for things quickly.

Continuing to postpone decisions or persisting in wrong assumptions, will only upset you emotionally and add new frustrations to existing ones.

In cases of excess, the consultant tends to overestimate themself and face events head-on, with an exalted and unconscious spirit that puts them in a position to commit or suffer abuse. Bad news, unpleasant surprises, forced changes, or disappointments are on the way. It can also refer to coercive magickal practices, spiritism, evocations, or a mediumistic chain.

The answer to the question formulated by the consultant is negative, the final judgment will be unfavorable. It determines a lack of energy or evolutionary desire. Inability to endure a total change.

Anchoring to materialistic values in contrast to inner drives. Psychological resistance and avoiding responsibility towards any changes. Mediocrity, inaction, stasis. A tendency towards mental overestimation. An uncontainable desire for forced transcendence.

Inability to live the material part, contrasting it and defining it excessively compared to the spiritual part. Imposed and inappropriate changes, troublemakers, and plagiarists.

From an emotional point of view, it is a couple in a crisis, loss of affection, heading for divorce. Fake friends. Be incredibly careful as it is possible these situations are still hidden and not very transparent, basically, they have not revealed themselves, just yet. Try to understand who is trustable and real, on whom you can rely on.

It is the characteristic of an exalted, false, cheater, and troublemaker. 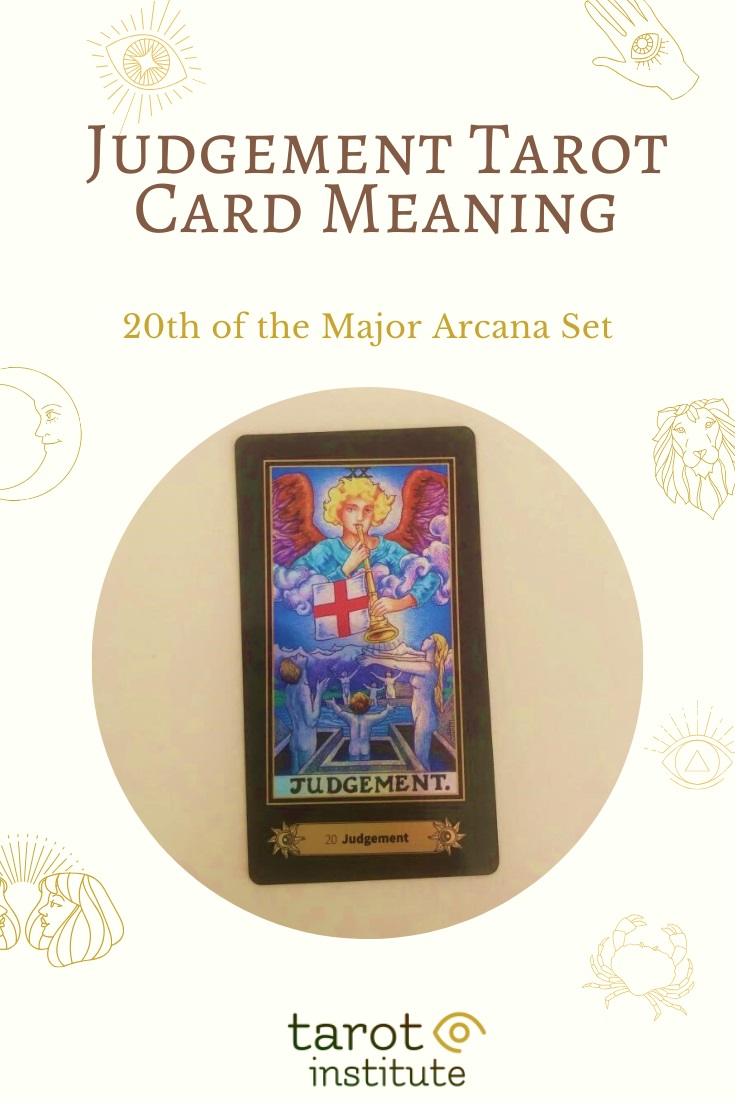 This Arcana calls us to a new life. It is never too late to start again, and it is never too late to be reborn. You can get out of the routine and old negative habits. By judging oneself, one can learn from one’s mistakes, leave the past behind, and laying the foundation for a new meaningful existence. We must answer the call, follow our vocation, and get back on the right path of life.

Short advice from the Judgement Card

Take stock of your life and decide what needs to be changed, it is never too late to be reborn. This is the time to put your vocation into action. What do you really want? Get out of the grave and start a new life. No need to be scared, and no need to hold yourself back. A new beginning is awaiting.

Leave what limits you. You have the chance to leave negativity and problems behind, you just need to decide to do it. Take risks if necessary, but do not compromise. Aim to make the most of it.

Learn from your mistakes and start over. Fixing things or trying to patch them will not lead to anything. This is the time for a real change, in both your narrative and your soul. Do not give up now, it is the chance for a new opportunity.

Disclaimer: The deck used as a reference is a traditional Raider Waite Tarot Card deck.