Let’s find out all we need to know about the tenth major arcana, the beautiful Wheel of Fortune tarot cards. With its colors and its symbolism, this tarot card has so much in store for us so, without any further ado, let’s learn what does the wheel of fortune tarot card means, what’s behind its symbolism and what message and advice want us to be most aware of!

The Wheel of Fortune: Card’s description

The tenth arcana of the Tarot is inspired by the vision described by the book of Ezekiel: four wheels of fire and strange animals united in groups of four. A very widespread symbol in medieval iconography, which used it to depict the cyclicity of universal rhythms, the alternation of day and night, the phases of the Moon, the motions of the planets.

Not to mention that the wheel was used as a torture tool to extract confessions. The Wheel is therefore the symbol of existence, of luck, of the sum of the movements from which life flows. The positive and the negative, the yang and the yin, in their eternal alternation, are summarized here in the figure of the winged and crowned monkey, who is holding the sword, motionless, balanced on the wheel, while two other figures, one rising and l the other that descends, represent the two opposing moments: the rise and fall. 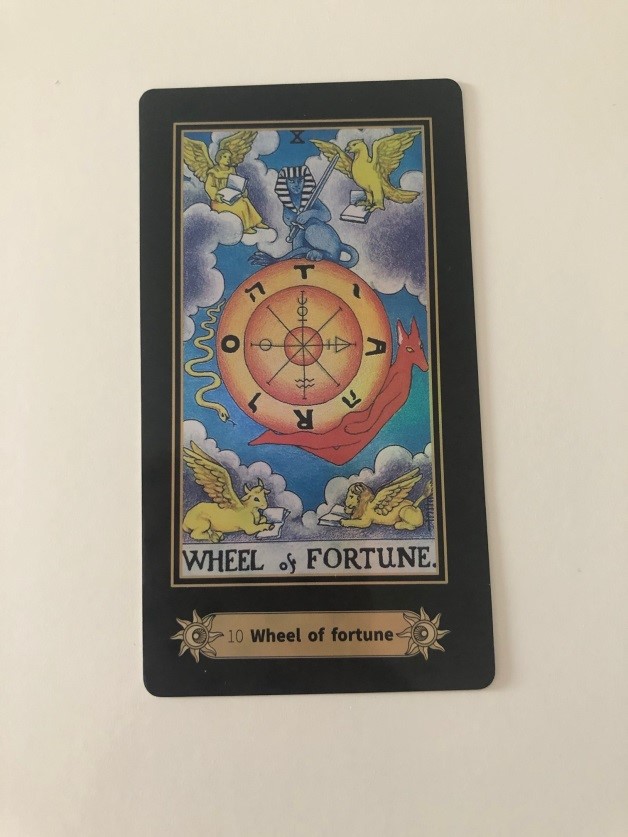 The circular symbolism of the wheel, emblem of movement and becoming, is offset by the square shape of the base, which alludes to fixity.

In alchemical language, the fixed, or the male, the sulfur, therefore joins the changing, the female, the mercury, to give life to the salt, the product of the union between the opposites. The four colors: red, blue, green, yellow, are respectively symbols of Fire, Water, Air, and Earth.

The wheel contains the karmic principle of reincarnation, represented by Set, the snake, which descends to Anubis, which is the new life. Above the wheel, another sphinx, to remind us that everything that dies is reborn and that the ups and downs of life are cycles necessary for growth.

Alchemical symbols inside the wheel indicate the transformation of the elements by reactions to actions, indicating that everything changes.

Inside the wheel, there is a series of letters that can be read clockwise, counterclockwise or anagram, and have different meanings depending on how they are read … the concept is always that everything changes, depending on the point of view!

The letters are T-A-R-O. Read in this order, Taro, are the Tarot.

But read backward, Orat, is Latin, meaning Speaking as communication always helps a change to happen. The anagram Rota is the Latin name of the Wheel of Fortune.

Also read:
What are Tarot Cards Used For?

Since everything moves, turns, changes action and orientation, nothing, like, recalls the unstoppable movement of the wheel remains fixed in the universe. The consultant will do well to immediately take advantage of the favors of fate, which currently offers him many possibilities for progress.

The situation can change as soon as possible and then it would already be too late. The essential is knowing how to observe and support the quality of time, written in the sky by the movement of the planets, seizing the right moment to act, and instead renouncing the action when this could prove prejudicial.

The Wheel of Fortune, especially when it comes out first in reading, has the power to nullify the bad omens of the neighboring cards, except perhaps the Tower, too drastic to be able to suffer balancing influences. The events, in fact, follow an unstoppable movement and, if it is true that what is good today, tomorrow may already prove to be bad, the opposite is also true.

Unexpected and happy events, surprises, positive news, favorable circumstances, a lucky moment not to be missed, are looming on the horizon. Good success can be obtained thanks to the promptness of spirit and the energy, now supported by experience, supporting the upward movement of growth, elevation, elevation.

It expresses luck first, but not as random as it would seem, but sought and obtained. It then indicates the ability to be above events a free spirit released from identifications and suggestions, centrality and balance in each event; ability to change and modify with respect to a need, ability not to get involved by external ways and acts; winnings at the game, sympathy, optimism, fortuitous and unexpected fulfillment.

Good centralization and good use of your energies. Take situations in hand in a lucid and successful way, sagacity, ability to center problems.

The consultant is destined for a crucial meeting for his future. For those who are still single, a new love looms on the horizon, for boyfriends, we begin to talk about marriage. Happy wedding, desired events in a relationship.

The time has come for the rescue. The circumstances are favorable to the desperate efforts and attempts which are very rich in palatable fruits: successes, career advancement, promotion, business expansion, increase in productive activity. Hard work will be adequately rewarded.

A person who suddenly came to the aid of the consultant, a benefactor, an elderly friend, nice and optimistic.

Unforeseen and negative external influences, against which it is impossible to fight, dissuade them from throwing themselves into new enterprises. The consultant will do well not to forget that those who go up too quickly, perhaps with the help of unclean means, decay just as quickly: change is always lurking; fate always has some unpleasant surprises in store.

Nothing that has been achieved, in love, in work, in finance, can reasonably be considered definitive. Unexpected obstacles to the realization of the project.

It can simply be a moment of stasis, a blockage, perhaps caused precisely by the consultant, confused, passive, insecure, attacked by the status quo, and resistant to combat.

It means attachment to the things of the world, half-abandoned projects, sudden misfortunes, economic losses, unforeseen, passive attitude towards the randomness of life, a moment of great internal and/or external confusion. Inability to separate from the collective unconscious, apparently unmotivated fears, instability, waste of energy, economic losses, lack of centrality, dispersion, futility.

Lightness, insecurity, bad luck. It determines an apparent centrality that is only ego-centered and not substantial, therefore egocentrism and egoism, it is believed that the moment exists only in function of ourselves, limited minds and exasperated materialism, money earned at gambling randomly wasted unnecessarily, waste of energy, presumption, materialistic identification.

Couple crisis, emotional instability, narrow-mindedness, and lack of respect for the partner’s needs. A difficult choice to face.

Fluctuations, precariousness, failure, career decline motivated by external factors, independent of will. The expectations of the consultant will not be fulfilled. Be careful.

An irritable person, of unstable temperament, moody; an elderly person with health problems, misanthropic and depressed 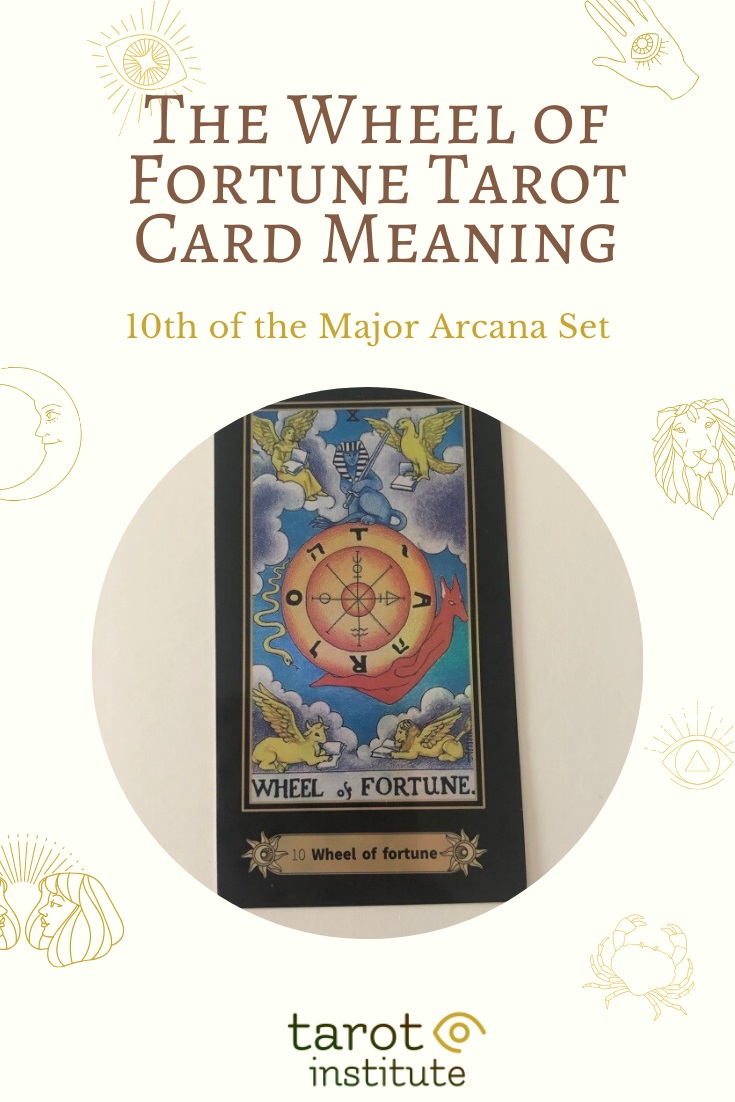 The Wheel of Fortune: Psychic revelation

This Arcana represents Destiny, the imponderable factors that operate on our life, and that is beyond our control. Since the nature of the wheel is to turn, it symbolizes the perpetual alternation of life cycles. There are spiritual forces at work behind the fabric of reality, forces that manifest themselves in the crucial moments of our existence.

The lesson of the wheel is to accept the perennial change and trust the Cosmic Design of which our life is a fragment.

Advice from the Wheel of fortune tarot card

Open yourself to change. Catch the moment. Take the opportunity that presents itself. The universe supports you. You have the opportunity to make your dreams come true. This is the time to act boldly because you are supported by invisible forces.

Your destiny is being fulfilled: accept it. The situation you are experiencing now is part of a broad design. The wheel is spinning. Don’t cling to the past, but be prepared to change. Luck is on your side, take a risk. Revolutionize things. Aim high.

Do not be satisfied, but follow the Path that inside you know that you must and want to go. However good or bad a situation may be, you can be sure that it will change.

Disclaimer: The deck used as a reference is a traditional Raider Waite tarot deck.