The Hanged Man is one of the Major Arcana that tries to give us special messages, warnings, and recommendations to change and shift our perspective and live a better more productive life.

Hanging for the right foot on a beam, with the left knee folded across on the other leg, the young man depicted on the arcana n. 12, in analogy with the twelfth sign of the zodiac, Pisces, which coincidentally corresponds to sacrifice and feet, experiences the painful torture reserved in the past for debtors.

As the English poet E. Spencer said in his poem “The Fairie Queene”: “He for the feet hanging on a tree, and thus derided by all passers-by, could see his punishment”.

In reality, more than a punishment, the Hanged Man is the symbol of passive, mystical initiation: knowledge is not obtained through active research, study, experimentation, as is customary here, in the West, but all oriental, remaining motionless, available for receptivity and listening.

The body of the Hanged Man dangles in the void, between two columns (perhaps again the entrance columns of the temple of Solomon, Jakin, and Boaz), abandoned but still bound, with his hands behind his back, presumably tied, which prevents him from freeing himself and to act, because the liberated soul is now escaping the reality of the matter.

The Hanged Man has discovered that the secret to penetrating the essence of things lies in their reversal.

From the reversal of perspective, from the abandonment of common mental patterns, through the experience of solitude and pain, the clear and illuminating idea arises, a prerequisite for self-acceptance and transformation.

Hanging, or the inversion of perspectives and values, gives the personality a new softness, far from the rigidity of schemes and conventions. It is perhaps easier to live upside down than upright, towards which it is more drastic; the arcana wants to be an invitation to flexibility, receptivity, and adaptability.

The consultant, voluntarily or not, has all the time he wants to review situations and postpone choices and projects.

It is not a time of action but of waiting and prudence. Any delay, any obstacle, has a hidden reason and must be interpreted as a providential notice, a sign from heaven. All that remains is to accept fate, including blockades and defeats, and submit at least temporarily to the course of events, without attempting to change it. 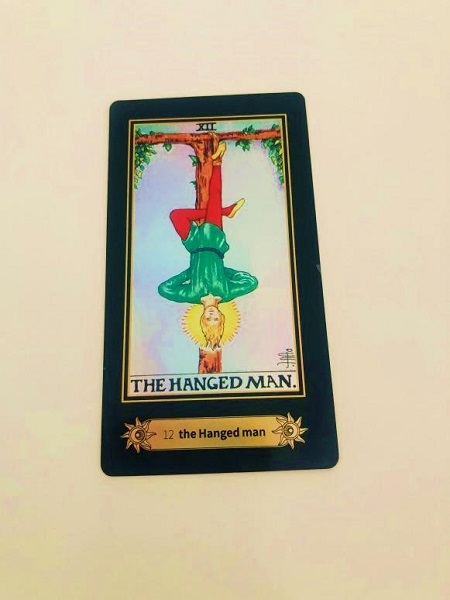 It is an arcana of faith and dedication. Everything must be selflessly sacrificed to a person or a cause, without expecting immediate rewards. Unlike the transformation desired by the Wheel of the Fortune, rapid and sudden, it will be a slow transformation, more internal than external.

The current situation is, however, destined to completely overturn, to undergo radical changes and decisive turning points, only apparently negative. An alternative lifestyle choice, outside of competition and consumerism.

Reinterpretation of the past, a new and different understanding of things. In the figure of the Hanged Man, it implies a radical liberating reversal, tests that will give an excellent result against all assumptions, and the ability to face events with confidence and wisdom. Spiritual tranquility, introspection, enlightenment, chosen and motivated sacrifice, and selfless help.

Let yourself go to a situation that will bear future fruit. Poignant affections. When he comes out in a suggestion position: Do not insist with a hard and selfish attitude, but soften. This is an analysis period.

A secret, romantic, internalized, and perhaps initially unrequited love, a platonic feeling, which leaves no room for physical experiences. The union that the consultant thinks about will prove to be lasting and faithful because it is built on patient expectations. It does not exclude a temporary separation from the partner in view of a happy future together.

The abandonment of a loved one can serve to make people think and mature.

A person brought to altruism and sacrifice, an idealist, a doctor, a philosopher, a priest, a genius, an artist, a musician, a healer, an occultist, a misunderstood. Sailors, ship owners, fishmongers, lifeguards, nurses, psychiatrists, photographers, guards, firefighters, detectives. Faithful people or animals.

When the hanged man is reversed, it is all about a particularly difficult life phase, marked by worries, remorse, lost opportunities. Gripped by an infinite series of doubts, submerged by a sea of uncertainty, he feels unable to decide and want and ends up abandoning himself to the only road that appears possible to him: that of inaction and renunciation.

In this case, there are many risks, from the loss of contact with reality, from the illusion to utopia, apathy, indifference to the most serious forms of depression, persecution manias, masochistic self-destruction, refusal to deal with problems, and fleeing everyday life through alcohol and drugs.

And again, attitudes of self-indulgence, victimization, opportunism, errors of all sorts, excessive credulity, superstition. Announce disappointments, boredom, fatigue, bitterness on all fronts, a useless or excessive sacrifice, painful trials lived badly, without succeeding in teaching a story. An inevitable loss, a detachment, an abandonment, a situation of loneliness and defeat.

The arcana is often a sign of lies, deception, intrigue, a situation of chaos and anarchy, both personally and politically, and also of hatred, persecution, racism.

Stiffeners, uncompromising and judgmental suppositions. Sacrifice experienced as catharsis, blackmail victimization, using an apparent weakness in an instrumental and opportunistic way, inability to let go of situations or relationships.

An unrequited love, the end of a relationship, separation, disappointment, defeat. The consultant, although he wishes them, is not led to demanding ties, to the family, to marriage. Sometimes a sentimental project is realized and then turns out to be unsatisfactory over time. It does not exclude a betrayal or a bond with a person already engaged.

An unsustainable professional situation or environment or a need to change. Dismissal, lack of work and support, stress. Studies carried out unwillingly for lack of motivation.

Enemy people, more or less occult. A person too dreamy, introverted, inconclusive, shy. An outcast, a drug addict, a false prophet, mystic, and fanatic. A kleptomaniac, a person afflicted with mental disorders. 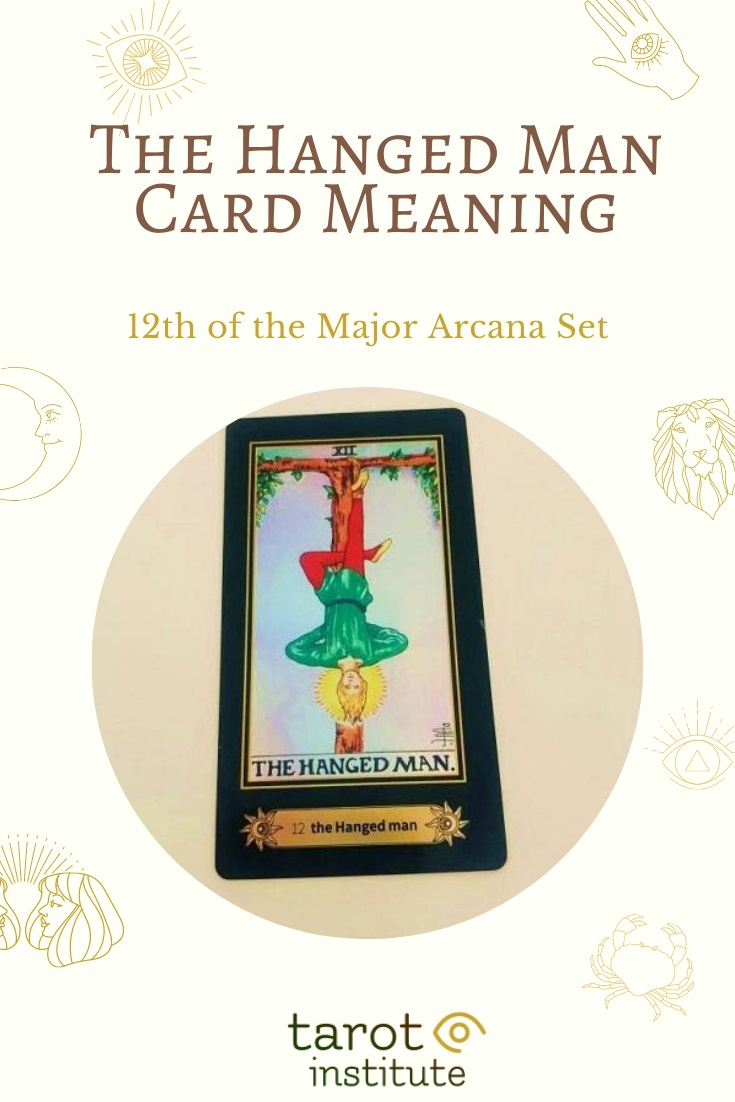 A man voluntarily underwent an initiation process from which he will emerge transformed. Through self-sacrifice and pain, a new individual will emerge. At this moment his body is immobilized and must accept everything that the universe brings him: cold, rain, suffering.

Through acceptance, he will come to a total renewal of his being. Even if he cannot act outside for the moment, his spirit is free to work inside, on himself, in the depths of his soul.

Look inside and renew yourself. Turn your way around. Be ready to radically change your ideas and beliefs as well.

Sacrifice something to get something else. Give up what’s superfluous and focus on the essentials. It is not the time to expand, but to limit.

Think in an original and different way from all the others. Do the opposite of what you’ve done so far. Ask yourself what’s beyond appearances.

Disclaimer: The deck used as a reference is a traditional Raider Waite tarot deck.