Those interested in astrology and Tarot Cards are struck by the similarities between the two systems and cannot escape the temptation to establish a connection between the symbols of astrology and those of Tarot Cards. That is an association between astrological elements and to the Tarot Cards. As an example, think of the affinity between the symbolism of the Hermit and that of the planet Saturn, both referable to isolation, withdrawal, and detachment. Let’s find out what tarot cards represent which zodiac signs!

As for the analogies between astrology and fortune telling, the first thing to note is that the Tarot Cards on the one hand and the zodiacal circle on the other, draw two symbolic maps of the same territory, being the future of the consultant.

Few people know it, but each sign of the zodiac is associated with one of the 22 Major Arcana cards.

The word Arcana means ‘Secret’. So, the Major Arcana cards are the cards that contain the major, or most important, secrets of the entire deck.

Each card contains an inexhaustible symbolism and lends itself to a whole life of reflections and insights.

These cards, which are among the most powerful of the Tarot Cards, often feature archetypal figures on the surface, that represent the characteristics, qualities and defects of a native and their zodiac sign.

Each zodiac sign describes essential personality traits of those born at a certain time of year. To connect the Major Arcana cards and the twelve signs of the zodiac, the peculiar features of the cards must be combined with the signs, so let’s see what the Tarot Cards are associated with the 12 signs of the zodiac.

Let’s find out what Tarot Cards represent which zodiac signs

The Tarot Card associated with the sign of Aries is the Emperor. It is a very powerful, dominant figure that you can always count on, especially in times of great need. The Tarot represents both Aries’ loyalty and its ability to make new friends wherever they are.

Just like the figure found on the card, the Aries native tends to use his authority and his analytical powers to help others and to achieve his goals.

If during the Tarot consultation this card appears upside down, it means that the native will have to reconsider his objectives to identify the easiest ones to achieve. However, one thing is certain: thanks to the inner resources available, he will be able to fulfill all his desires.

The Pope’s Tarot Card, or Hierophant, is associated with the sign of Taurus and represents the will to seek knowledge from prominent masters, who can help to seek truth by exploring only tradition.

Just like the Pope, the people of Taurus are constantly looking for the deepest meaning of things. To do this they rely on their roots and the traditions they harbor in their soul.

These natives do not stop at the surface, but go straight to the heart of things, coming to discover important truths that the other signs have yet to learn.

This card represents the spiritual transformation from student to teacher.

There is no need to hide it or pretend nothing, but every Gemini native has a dual personality that is well depicted in the Lovers card.

Gemini natives, when changing their point of view, are confronted with complicated choices that can also involve their morale.

This Tarot encourages them to weigh every decision wisely, even at the cost of accepting compromise and to follow the chosen path without hesitation.

The natives of Cancer apparently are tender, fragile and loving but careful. Under the facade of apparent weakness, often real leaders hide, but are capable of waging demanding battles against the challenges of life. The Tarot Card associated with their sign is that of the Chariot.

Although the natives of Cancer are in constant search for security and a safe place to take root, they are lovers of freedom. They use their intuition to solve problems, whether it be personal, emotional or working.

The Strength card represents both the physical strength of Leo natives and their emotional, mental and spiritual strength.

People born under the sign of Leo are endowed with superhuman courage, which allows them to face any obstacle or problem they encounter.

Not only that, they encourage others to do the same, as brave captains who inspire soldiers on the battlefield. However, they must be careful not to sin by showing too much of egocentrism.

The Tarot Card of the Hermit depicts the personality of the Virgo very well. Sometimes, these natives need to slow down and retreat to a safe and peaceful place to reflect and analyze themselves and to understand which the best path to take is.

An elderly man is depicted on this card, it indicates a person who can retire to their inner world and bring out the best in it.

When a native of Virgo decides to abandon the outside world and begin to explore the twists and turns of their inner self, they become pure and innocent as a child.

Libra natives have an innate sense of justice. The Tarot Card associated with their zodiac sign could only be that of Justice.

Justice uses scales to weigh needs and desires. To achieve balance, those born under the sign of Libra can leave aside the most irrational emotions and feelings when making decisions.

When the Libra native finally abandons indecision, they will be able to take the right path, which will help them to walk on the path of good.

Like the Tarot Card with which their sign, Death, is associated, the natives of Scorpio love transformation and continuous renewal.

They often change their skin like snakes, to try to free their spirits and be reborn in a new form.

Scorpio easily change identity and personality, and this makes them the most unfathomable and mysterious sign of all the zodiac signs.

Temperance card is a positive Tarot Card. This card makes Sagittarius natives people with a strong spirit of mediation, skilled at finding an agreement.

They are also understanding and sincere friends.

Sagittarius natives do not allow themselves to be frightened by obstacles and difficulties of life and manage to overcome them in order to achieve their path and the set and achieve objectives.

The Tarot Card associated with the sign of Capricorn is the Devil.

Capricorn natives rarely change their ideas and positions. They cannot stand changes, let alone unexpected events, even if they are able to face them with determination.

The Devil’s card invites these natives to face the darker sides of their soul, which Capricorns are often afraid to face, so that they reach for the knowledge necessary to initiate a spiritual transformation.

The Devil also encourages them to shake off the congenital pessimism of their nature which often pushes them to doubt themselves and turn it into trust. 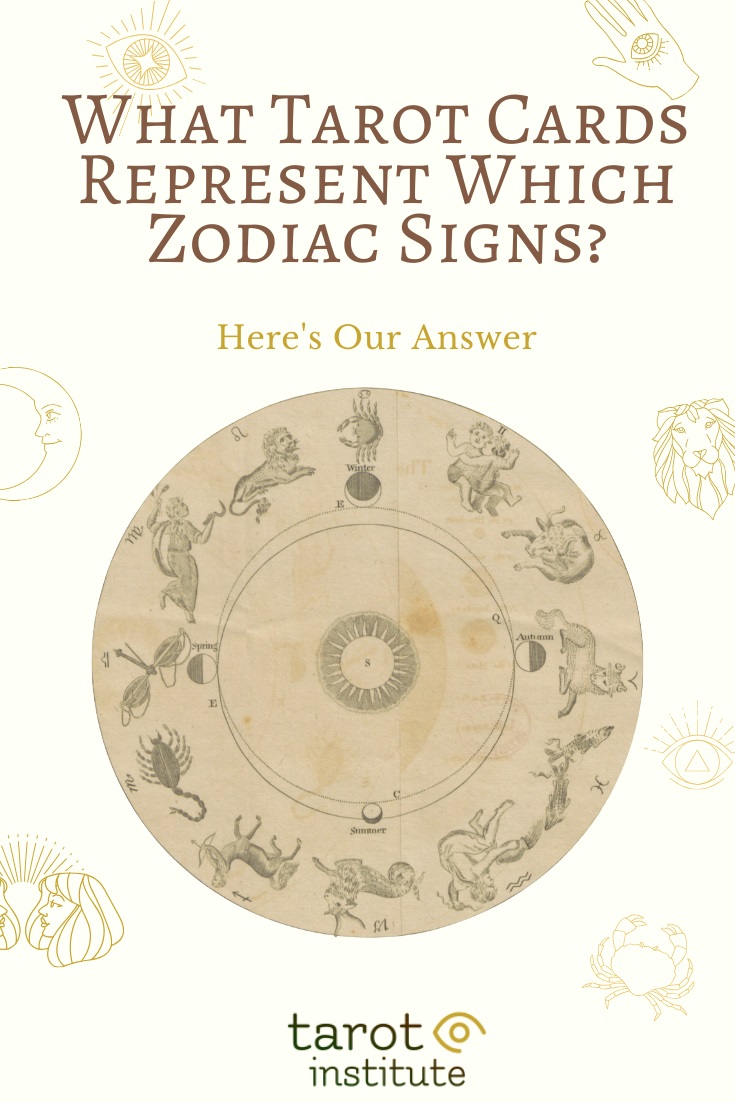 The Tarot Card, The Star depicts the innate optimism of the natives of Aquarius. When they look at the stars and make a wish, they truly believe that it will come true.

Their aim is to convince others that they can do the same.

The Tarot Card associated with their zodiac sign is The Moon.

Pisces natives tend to change moods very quickly, to daydream, to chase their own ideals and to dig into the deepest part of the subconscious.

They will be more likely to succeed in life if they follow the cycles of nature and use them in their favor to renew intuitive power.

The Moon guides their emotions, which play a fundamental role in the personality of Pisces natives. They have a compassionate nature, and this leads them to help others.

How to work with Tarot Cards and zodiac signs?

The best thing to do to work with Tarot Cards and zodiac signs is to use the stars to connect with the zodiac and use Tarot Cards to boost the effects on your sign. Maybe you don’t know this but, every month with the New and Full Moon, it happens that these lunar phases are in a specific sign.

If, for example, if the New Moon is in Taurus, you can use the Hierophant card for a New Moon ritual, to set your intentions and soak up the incredible benefits of a lunar cycle on your zodiac sign.

Another wonderful way to connect with Tarot Cards is to meditate on the card, as it represents the highlights of your personality and of your life path.

By working on them you will have the chance to really dive into the magickal power of the stars and the cards, opening your intuition and to all the infinite possibilities your futures and the universe hold for you.

Here’s How to Ask Tarot Questions About Love [51 Examples]
Next Post: Where did Tarot Cards Originate? [History Explained]